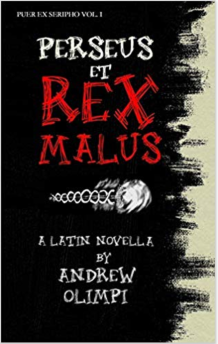 Andrew Olimpi regularly writes Latin readers.  Make sure and check his site, ComprehensibleClassics, often to see new titles as he publishes them.  I observe students choosing his titles like Ego Polyphemus and Familia Mala among others during our Self Directed Reading program.

Many students in level 3 enjoy Perseus et Rex Malus.  Although the title shelters vocabulary, this title has a large number of words used which is one reason it is in level E.  The 2nd reason is how often it changes time frames.  In the present Perseus the boy asks for stories from his mother.  Those stories happen in the past but there is frequent dialogue that happens in the present.  This requires quite a bit of time frame switching for the reader which is clearly an intermediate level task as defined by ACTFL.

Along the way, students experience Classical myths with recounts involving characters such as the Minotaur, Medusa and adventures from Perseus.  Throughout the title students will encounter dative indirect objects, clauses such as relative clauses, commands within dialogue, and numerous prepositional phrases to demonstrate the different locations of characters and events.

Dialogue begins in chapter 1 and, although the 3rd person is used often while telling stories, 1st and 2nd person forms appear within the natural conversation.  Indirect statement, a variety of forms of noun-adjective agreements and even more complex forms such as a gerundive and subjunctive appear naturally within the dialogue.

The time frame changes as the reader encounters Theseus versus the Minotaur in the Labyrinthus in Chapter 2.  An ablative absolute creates deeper understanding of how events are connected in time early on in the chapter.  The story describes the Minotaur multiple ways while continuing to shelter vocabulary as much as possible.  More 1st and 2nd person verb forms appear within the dialogue present in the chapter.

Chapter 3 jumps ahead in Perseus’ life as he is a bit older than chapter 1.  This is the 1st moment that may become disorienting for a reader who is not at the intermediate level.  The story jumps across time frame often in this chapter.  Descriptions of the past occur with conversation about the future.  It is important that a reader is able to recognize these changes otherwise this text may become incomprehensible, especially at this point.  But the story is rich and full of readable detail for the intermediate student who is prepared to follow time changes within a story.

Subjunctives, participles, ablative absolutes and a variety of types of questions continue to add depth for the reader as the story progresses with a recount of Medusa.  The story is first told to the boy Perseus by his mother.  Will Perseus be fated to encounter the horrible monster Medusa later in his life?

Chapter 5 is another moment where a reader not prepared for time changes may become disoriented within the time frame of the text.  The reader is introduced to King Polydectes.  Is Perseus the same age as when his mother tells him about Medusa?  As the chapter unfolds it seems clear that Perseus is older.  This revelation of a change in time frame is rewarding for the intermediate reader but may be disorienting for the novice reader.

Much more is revealed as the reader continues through the 2nd half of the text.  Continued use of complex syntax with sheltered vocabulary offers the intermediate level student a story with more depth that is still accessible with much repetition.  Perseus as the main character appeals to students who are fans of mythology.  Students who have read the Percy Jackson series make numerous connections as they read.

Perseus et Rex Malus is a much needed bridge text for intermediate level readers to read and understand complex Latin that maintains the support of sheltered vocabulary and repetition throughout the story.  Level 3 and 4 students choose this more often but the story may be accessible to level 2 students during the 2nd half of the year who demonstrate emergence into the intermediate level, especially in respect to understanding time frame changes throughout a story.  The addition of numerous titles written by Olimpi offers students the chance to progress through a series of titles.  This gives many opportunities for a student to recognize patterns of style within readable texts.

This site uses Akismet to reduce spam. Learn how your comment data is processed.